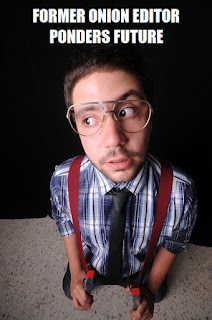 Former editor Bernie Berkeley, weeping profusely as he carried his cardboard box out to the parking lot, spoke briefly to the one disinterested reporter forced to cover the change in staff.

Berkeley admitted running seriously short of snark in recent months, leading to his dismissal from the paper. Berkeley also conceded that during the Iowa caucuses Ted Cruz had demonstrated fabrication skills far superior to his own, winning the hearts of The Onion's owners. Berkeley, a native of Tempe, Arizona, intends to return home for a scheduled job interview at Taco Bell.